The 2030 methane emission reduction pledge and the coal phase-out pledge were the two major achievements of the first week of COP26 talks in Glasgow.

2℃ target at hand -Will it strengthen global ambitions?

Based on the updated emission reduction commitments of nations and new pledges stated in the COP26 until November 3, 2021, the International Energy Agency (IEA) suggested  that the temperature rise at the end of this century can be controlled within 1.8°C, as shown in the figure below. Evidently, the methane reduction pledge is an important contributor in the IEA's analysis.

Figure 1: The relationship between the carbon dioxide emission from energy sector and the global average temperature rise 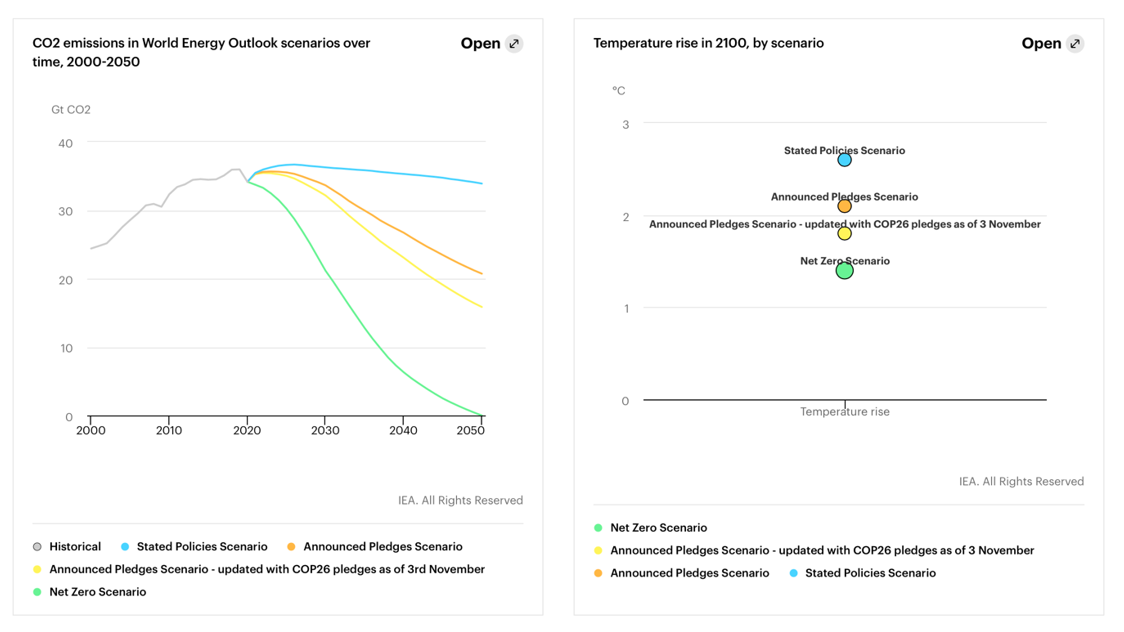 If the methane pledge is what the world from leaders have to produce in the beginning days of the conference, then the pledge of coal phase-out has largely surprised the audience. The coal phase-out pledge may showcase an alternative climate governance for the next decade, which is the industrialized countries will invest vastly in helping developing countries to accelerate the transition to clean energy. One of the key factors contributing to this trend is South Africa.

Among the countries (more than 40) that signed the global coal phase-out pledge on November 4, Vietnam may be the most unexpected participant. Among the endorsers, Vietnam is the second largest coal consumer behind South Korea and ahead of Germany and Poland. However, South Korea is economically more developed than Vietnam, with its GDP per capita ten times that of Vietnam. Vietnam has a very high energy demand to support its rapid economic development. Its dependence on coal is high and still grows. According to BP Statistical Review of World Energy, Vietnam’s coal consumption in 2020 was as high as 84 million tons of hard coal.[1]

Before COP26, the Prime Minister of Vietnam almost signed a policy to increase 100% of coal consumption by 2030 against the level of 2020. Economically, Germany can accomplish the coal phase-out pledge alone, or may even be able to help developing countries; South Korea may not need external support due to its economic ability; Regarding Poland, though heavily depending on coal, the country is still possible to phase out coal , with the support of the European Union. But why, Vietnam, a country that's still in the early stage of industrialization, signed the pledge?

Table 1: The coal consumption and GDP per capita of part of the countries in 2020 that have pledged to phase out coal

The comparison between South Africa and Vietnam presented in Table 1 can help us answer this question. These two countries have similar per capita GDP. In recent years, the growth rate of coal imports has reached double digits. Although South Africa didn't announce the pledge, its pace to transit to clean energy is accelerating. The news that South Africa announced on the third day of COP26 was inspiring. It committed to speed up the phase out of coal and develop clean energy with the huge financial support, $8.5 billion, from the UK, Germany and the US. By 2019, the total amount of financial commitments implemented by developed economies to support developing countries in addressing climate change is about 80 billion U.S. dollars, less than the promised $100 billion. South Africa’s coal phase-out funding fund from the three countries is more than a tenth of the global climate funding. As the host country of COP26, the United Kingdom must have spent a lot of effort in negotiating with developing countries that still rely heavily on coal. South Africa and Vietnam must have been in prioritized targets.

As South Africa begins to phase out coal with international support, followed by Vietnam joining the coal phase-out pledge as a strategy to tackle climate change, it seems that the era of "Coal Phase-out" is around the corner. Perhaps we will see the Vietnam government announce some kinds of financial support from developed economies.

This article is an original article of the Rock Environment and Energy Institute. Please contact us to obtain the appropriate authorization to reprint. For cooperation and authorization, please send an email to: liying@reei.org.cn

* This is the translation of an article in Chinese. Should there be any inconsistency between Chinese and English version, the Chinese version shall prevail.