The project team (Mr. Zhao Ang, director of REEI, and Mr. Lin Jiaqiao, deputy director of REEI) traveled to South Korea from 1st July to 5th July to visit several Korean environmental NGOs, think tanks and research institutions in Seoul, Gwangju and Busan, aimed to understand their work and research on energy and climate change issues, and to introduce the Energy Transition and Carbon Pricing (ETCP) Project which is cooperated by REEI and CANGO as well as seek further cooperation.

In addition, the project team participated in a seminar jointly organized by the International Climate and Environment Center (ICEC) and the Korea Federation for Environmental Movements (KFEM) on the morning of 4th July, 2019 at the ICEC office building. (For more details about the seminar, please browse http://en.reei.org.cn/activity/23). The following table presents the agenda for the schedule of Korea Field Trip. 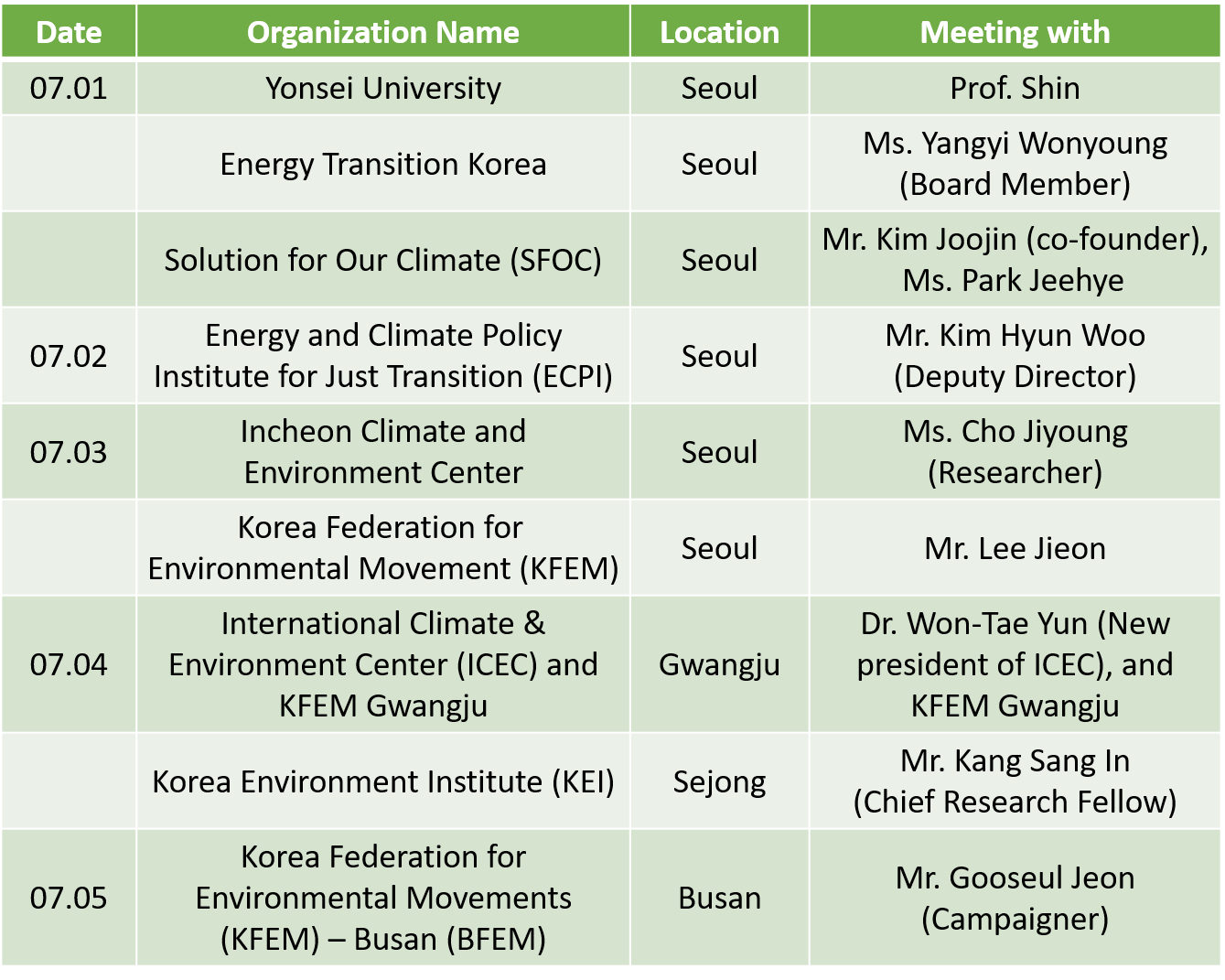 Through the sharing of the above organizations, the project team understands the situation of South Korea’s energy transition and policies on air pollution control. Although South Korea introduced PM2.5 standard in 2015, the work of reducing PM2.5 is still challenging since diesel vehicles account for a large proportion of total road transport vehicles. Therefore, it is a difficult task to promote energy transition especially in the transport sector. Prof. Shin Dong-Chun from Yonsei University thought it is a mistake for the Korean government to introduce diesel car especially the diesel SUV years ago.

In addition, Ms. Yangyi Won-Young, director of Energy Transition Korea, told us that currently the capacity of coal, natural gas and nuclear is 37GW, 38GW and 23GW, respectively, and the renewable energy power capacity is only over 10GW, while renewables include waste-to-energy incineration projects but the newly revised Energy Law has abolished waste-to-energy projects as renewable energy this year. Power sector can be seen as the most crucial issue in South Korea’s energy transition, since the state-owned power company is controlling the power price and is reluctant to develop more renewable energy power generation, hence the current power system cannot stimulate the process of further energy transition.

During the Gwangju ICEC seminar, Dr. Sang In Kang, Chief Research Fellow of Korea Adaptation Centre for Climate Change at the Korea Environment Institute, demonstrated that solar-integrated farming is one of the main choices for South Korea to complete its target of 20% of renewable energy in the energy mix by 2030, as it can solve a series of problems such as limited area and unfair subsidies. The current pilot projects have been completed and the implementation effect is good.

In terms of carbon pricing system, Emission Trading System (ETS) in South Korea has not been working well to increase the share of renewable energy. Besides, the current carbon price (30 USD/t CO2) is still low, which cannot discover the true cost of reducing emissions.

For the further cooperation of ETCP Project, Energy and Climate Policy Institute for Just Transition (EPCI) has signed the Memorandum of Understanding (MoU) with REEI, and Solution for Our Climate (SFOC) is willing to establish the partnership with REEI, exchanging information and seeking the opportunity of jointly holding events.

About
About us
Partnerships
Jobs
Contact us
Annual Report