Related
The Health Cost of China Air Pollution Might Be Underestimated: A Discussion on Value of Statistical Life
Renewable Energy Employment:Uncertainties in the “Boosting Effcet”
The “Chinese Dream” of Shale Gas as a Bridge Fuel
View more

The project team (Mr. Zhao Ang and Mr. Lin Jiaqiao from REEI, and Ms. Siwei from CANGO) traveled to Mongolia from 30th July to 2nd August to visit several Mongolian environmental NGOs and research institutions in Ulaanbaatar, listening to their work and research on energy and climate issues in Mongolia, and deeply introducing ETCP Project as well as exchanging ideas on the Project and potential cooperation in the future. The following table presents the schedule of Mongolia field trip. 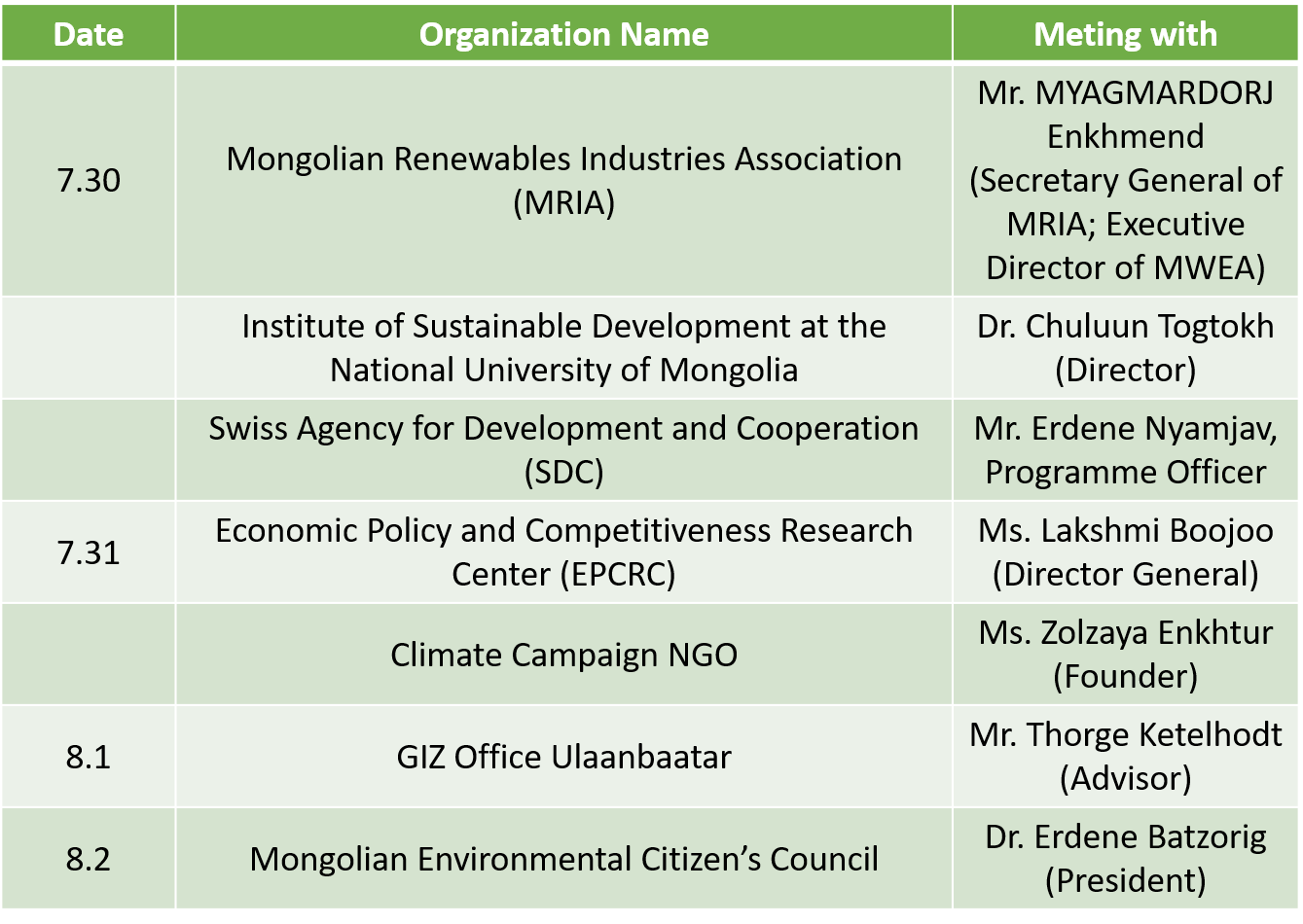 During the meeting, almost all the Mongolian environmental NGOs and research institutions discussed Mongolia’s energy and air pollution issues with the project team, while did not pay much attention on carbon pricing probably due to the low awareness of carbon pricing (only some carbon offsets projects) in Mongolia.

They mentioned that although renewable energy is being developed, Mongolia currently relies heavily on coal-fired power generation or heating, especially in the Ger (Mongolian name of the traditional residence, herders’ house) district, which has a 65% population in Ulaanbaatar, resulting in severe air pollution. Since May 2019, the Ulaanbaatar government has banned the burning of raw coal in the city, aiming to reduce air pollution in the Ger district and promoting the transfer to renewable energy, but coal is still the current solution to solve the power shortage and heating issues in Mongolia.

The Ger is built on the rangeland and cannot be connected to the power grid, hence the development of renewable energy is of importance for their life. At present, subsides from the Ulaanbaatar government have led to low energy prices, especially electricity prices, which have been heavily subsidized by the Ulaanbaatar government. However, Mongolia’s feed-in tariff is too high, which is a burden to the government. In addition, one or two hydro power plants are under planning in the future.

During the discussion of the ETCP Project, they shared different insights and ideas with the project team. In terms of cooperation in the ETCP Project, the three organizations tend to sign a Memorandum of Understanding (MoU) with REEI, namely Mongolian Renewabls Industries Association (MRIA), Climate Campaign NGO, and Mongolian Environmental Citizen’s Council (MECC). MRIA is also willing to participate in any capacity building workshops in China and is interested in learning more about China’s air pollution control. Besides, MECC is willing to join the tour for Mongolian NGOs in Beijing next year.