Power Sector in the Chinese Carbon Market: A Promising ‘One Eighth’?

On the Dec 19th 2017, China officially launched the national carbon market. As expected, the power sector is the only industry included. It is too late to discuss whether more sectors should have been covered in China’s emissions trading scheme (ETS). However, discussions on the power sector and the national carbon market must continue. On December 6th, SinoCarbon, German Corporation for International Cooperation (GIZ) and International Carbon Action Partnership (ICAP) held an international workshop on emissions trading and power industry regulations in Hangzhou. EU specialists attending the event discussed policy design, emphasizing the guidelines that the power sector in China’s carbon market should adhere to. Experts further stated that the Chinese national carbon market should pay attention to lessons learned from the EU emissions trading system (EU ETS), such as free allowances, benchmark calculations, etc. These issues may be particularly critical if China’s current power market stays in low degree of liberalization. This article discusses the following questions to outline the opportunities and challenges presented by the integration of China’s power industry into the national carbon market. It will address questions one to four, with a subsequent article to follow.

Why start with the power industry?

What is the basis for the power industry to allocate allowances?

In May 2017 the “The Allowance Allocation Plan for the National Carbon Market (Discussion Paper)” detailed allowance calculations for three industries: power, electrolytic aluminum, and cement.  Aside from the current method of allowance calculations, the discussion paper also included expert and enterprise opinions. [2] 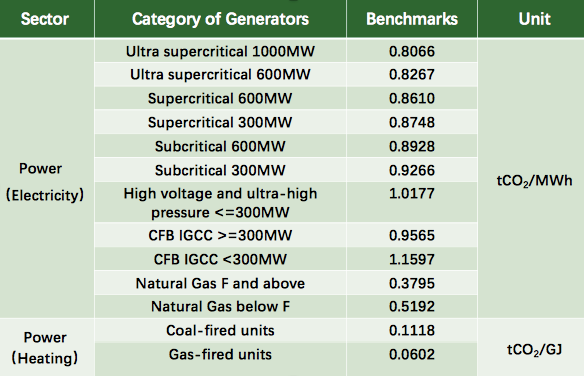 What are the potential issues arising from free allocations of allowances    in the power industry?

The initial free allocation of allowance is an issue that cannot be easily circumnavigated.  The EU’s distribution of free allowances led to ‘windfall’ profits, but also an over allocation of allowances. Will China’s national carbon market face the same issue? As explained by EU authorities, the distribution of free allowances can causes distortions to the market. In order to avoid this problem, allowance allocations should be distributed through an auction market, with gradual increases the proportions for auctioning. To exemplify, within the above process of free allowance distribution, controlling enterprise do not pay due cost, which essentially allows them to consider the allowances they receive as free of charge. This severely undermines motive and imitative to mitigate the problem. At the same time, free distribution sets a bad precedent for future investments in power sector. It encourages investments in ‘dirty energy’ or high-carbon electricity, rather than ‘green’ or renewable energy. In the case of China’s low energy market, this presents a further problem. Chinese enterprises cannot send increased carbon costs downstream, giving them bargaining leverage over carbon market authorities.

There are three predominant methods to reduce carbon emissions from coal-powered generators: replacing coal with lower-carbon fuels, such as natural gas, improving energy efficiency, and implementing carbon capture and storage (CCS). [3] Due to the effectiveness of energy-saving and emission reduction policies introduced as part of China’s series of Five Year Plan and the progress of thermal power in China, coal-powered power plants in China are advancing on the international standard in terms of power production and energy consumption. China’s carbon emission reductions will be limited from improvement of energy efficiency, due to the fact that energy-saving measures have already been enacted in China over the past several years. Arguably, the emission reduction of the power industry after its inclusion in the carbon market will depend on future carbon prices and the development of breakthrough technologies. Arguably, CCS developments will take time to become commercialized. However, fuel substitution may be a promising option, such as reducing coal output and increasing the output of natural gas or even biomass power.

Among the industries included in China’s national carbon trading pilot projects the power sector has been positioned as the regulating authority. Within the pilot industries in the national carbon market, the power sector has also been placed in the upmost importance: the original eight industries have been indentured to the power industry. This one eighth holds the largest share of emissions and an obvious advantage of carbon accounting.  However, the national carbon market still remains in a beta stage. The NDRC’s cautious attitude is a wise move, not only to show the climate change commitment, but also to cover the largest emitting industry. China's power industry is currently facing a critical phase of marketization and reform. The next portion of this article analyzes several issues related to the carbon market and power industry reform.