Technically, municipal solid waste (MSW) incineration (hereinafter referred to as waste incineration) was once considered as the most ideal way to achieve "harmless, reduced and reutilized" solid waste treatment, and was expected to gradually become the main way of future waste treatment. [1] The State Council's "13th Five-Year Plan for Ecological and Environmental Protection" in 2016 and "Opinions on Comprehensively Strengthening Ecological and Environmental Protection and Resolutely Fighting the Battle against Pollution" in 2018 also clearly stated to "promote waste reutilization and vigorously develop waste incineration for power generation".

However, in the public document proposed by deputies to the 2019 National People's Congress (hereinafter referred to as the reply document), the Ministry of Finance publicly pointed out that waste incineration projects had low efficiency and poor ecological benefits. [2] In spite of this, the reply document still clearly indicated that existing subsidies should be extended to existing projects, the proportion of new projects to be included in the subsidy scope should be gradually reduced, and support should be provided to the waste incineration industry by increasing the charge of municipal waste treatment.

Why is incineration, once believed to be the main way of future waste treatment, now considered inefficient both technically and ecologically? Will its development gradually slow down during the 14th Five-Year Plan period, by extending existing subsidies but cutting down new ones?

Segregation and collection is the first step, between the generation of waste to its final disposal, and also a key step in waste incineration [3]. If unclassified waste that could have been recycled is burned to generate electricity, the exhaust gas produced would be difficult to filter and would reduce the treatment efficiency. Although waste sorting has been on the agenda in China, the relevant policies and measures have not been strictly implemented except in Shanghai. After the collection and transfer of MSW, sorting and other steps needs to be adopted in the pre-incineration treatment process. Compared with manual sorting with low efficiency and poor working environment, the commonly applied machine sorting in the pre-treatment process means only particle size sorting, which is aimed at improving the efficiency of the "burning" and cannot realize taxonomy reutilization.

In the context of climate change, higher carbon emissions indicate that the ecosystem will bear more risks. To sum up, although waste incineration has technical advantages in " harmlessness, reduction and reutilization", through comprehensive application of other technical methods after waste segregation, the goal of mitigating climate change can also be achieved. Therefore, in this moment, as the mainstream waste treatment method, incineration, which brings high ecological and environmental risks, seems to do more harm than good, and its impact needs to be considered in the policy making process. 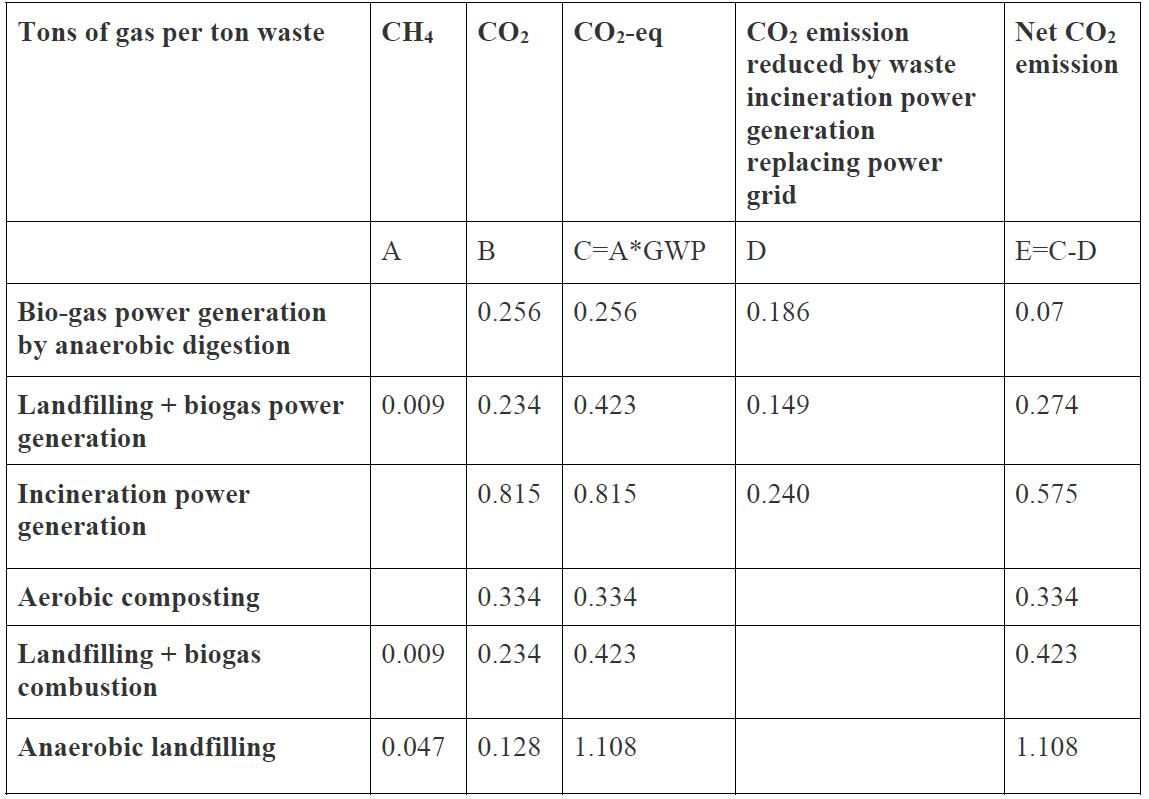 Note: In this study, the carbon emission reduced by waste incineration power generation replacing power grid is estimated by Li Huan et al., Tsinghua University. The value is 0.24 tons of carbon dioxide, slightly different from that estimated by NDRC.

More subsidies for incineration? Less helpful than none

In its response, the Ministry of Finance shows waste incineration should be regarded as biomass (renewable energy) power generation, and acknowledges its contribution to China's energy restructuring. Essentially, waste is not biomass energy, and incineration should not be eligible for additional subsidies for renewable energy. It was mentioned in the 13th Five-Year Plan of Biomass Energy Development (Guoneng Xinneng [2016] No. 291) that bio-mass energy was an important renewable energy with the characteristics of green, low-carbon, clean and renewable. Evidently, waste does not meet the above characteristics, especially "renewable", but it continues to be classified and subsidized as biomass energy. Since these subsidies were wrong from the beginning, remedy is inevitable.

Looking into the existing subsidy policies, more subsidies will be obtained with increasing amount of waste processed by incineration, which is bound to stimulate the continuous development of waste incineration industry, speed up the construction of waste incineration power plants around the country, and eventually impose a greater financial burden. It was clearly stated in the reply document that the reduction of subsidies for new projects would clearly be reflected in the 14th Five-Year Plan, which was to signal a future of subsidies elimination, and would also be one of the transitional means to eliminate subsidy policies.

Construction of incineration plants should stop

According to the data of the National Statistical Yearbook for Urban and Rural Areas [5], the total amount of domestic waste that went through harmless treatment in 2018 was 226.5654 million tons, including 1176.06 million tons of sanitary landfill and 101.849,000 tons of incineration. Compared with 2017, harmless treatment volume increased by 7.28%, sanitary landfill volume decreased by 2.75%, and total incineration volume increased by 20.34%, where the growth rate of incineration volume was much higher than the growth of total amount of treatment. During the 13th Five-Year Plan period, under the background of vigorously developing waste incineration construction, the number of waste incineration projects opening has gradually increased every year.

Subsidizing waste incineration as a renewable technology is wrong from the source. In the long run, to support the future ecological development, subsidies should not only be withdrawn, but also inevitably cancelled. The subsidy relief mentioned in the reply document should be one of the transitional policies to remove subsidies. Overall, the total amount of incinerated waste is close to saturation. In the 14th Five-Year Plan, the construction of waste incineration plants should stop to avoid over-saturation. In addition, ecological and environmental benefits should be the key consideration in planning, and the whole process of waste treatment should be fully discussed to clearly guide the sustainable development of municipal solid waste management.

This article is an original article of the Rock Environment and Energy Institute. Please contact us to obtain the appropriate authorization to reprint. For cooperation and authorization, please send an email to: liying@reei.org.cn

* This is the translation of an article in Chinese. Should there be any inconsistency between Chinese and English version, the Chinese version shall prevail.